Handshakes and greetings of the world

The handshake, as we in the western world know it, is used throughout society - from meeting new acquaintances in an informal environment, to formal business introductions in the corporate world. The handshake is symbolic. Extending a weak lettuce-y grip which has the tenacity of a haddock will win you neither friends or business. Too strong and you’ll be dubbed a ‘bone crusher’ - more suited to the realms of the WWE ring. The handshake came into existence in medieval times; by offering your hand you were demonstrating that you were not going to draw your sword. To this day, and in boardrooms up and down the country, it can still offer a similar level of comfort. As human civilisations have developed in different parts of the world, so too have the greetings and interactions of those societies. What’s most interesting is that not all of these greetings use hands - why is that? Here are a few greeting gestures from around the world, accompanied by a little history as to how they came into existence. Tibetan tongue In the ninth century, Lang Darma, a Tibetan king was known for his cruelty and the fact that he had a black tongue. A large majority of Tibetans are Buddhists and believe in reincarnation, so in order to prove you are not the reincarnation of this evil king, you must greet each other by sticking out your tongues and demonstrating you mean no harm. 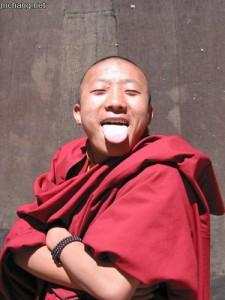 Tibetan Tongue Cambodia’s ‘Som Pas’ This is the traditional greeting where hands are held together in prayer. The higher your hands on your chest, the more respect is shown for the other person - the most respect must be shown for elders and monks. Be aware that touching a person’s head in Cambodia is seen as disrespectful - it is thought of as the most important part of the body, where the spirit is found. China When greeting in China, it is traditional to hold your left hand over your right fist at the level of your chest. There are many stories as to why this is done; some say it represents yin and yang. Nowadays in China it is customary to shake hands. However, the greeting is still used in karate (originally a Japanese martial art); the most fitting explanation is that the right hand, made into a fist, represents the fight within, and the open left hand shows that you will choose not to use this power within you. 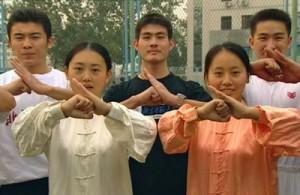 Chinese greeting Indian Subcontintent You’ll find many Indians greeting their friends and acquaintances with the word ‘Namaste’, which literally means salutations to you. While doing this the palms are pressed together, fingers point upwards. A small bow or nodding of the head often accompanies the greeting. The gesticulation can also be performed wordlessly with the same meaning. ‘Sawaddee’ is said in place of Namaste in Thailand. 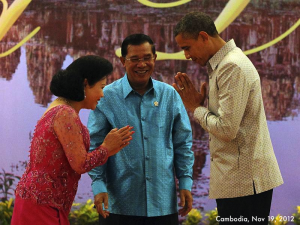 Obama's namaste Islamic Nations Contact between the sexes is generally not permitted in Muslim countries. However, the most common greeting takes the form of placing your right hand on your heart, touching your forehead and then over your head and you say ‘As-Salaam-Alaikum’, As-Salaam-Alaikum  meaning peace be with you.