Study reveals SE1 as the hot spot for SMEs in London

Flexioffices have recently conducted comprehensive research into the distribution of small to medium enterprises (SMEs) across London outcodes. SMEs were segmented based upon their sector, which allowed the study to compare the distribution of SMEs in each sector based on their outcode. The study used Flexioffices’ data from the past two years.

A map of the sector-specific SME distribution has been developed by Flexioffices, as an engaging means of illustrating the comparisons between industry placements across London.


Key findings of the study: 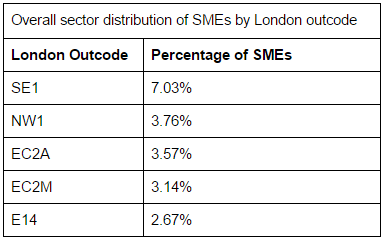 SMEs in the recruitment sector:


The study reveals intriguing comparisons between the distribution of sector-specific SMEs. The key comparisons indicate that the recruitment sector is the most polarised in terms of distribution, with 43% in East London postcodes, whilst only 10% of recruitment SMEs are based in North London. 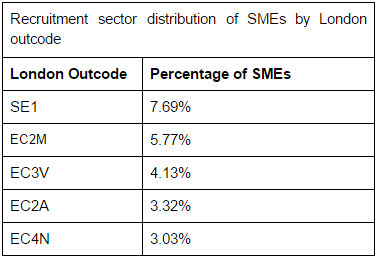 SMEs in the finance sector:


The data depicts that the SMEs in the finance sector are also heavily clustered in the East of London. Providing a similar pattern as the recruitment sector, a total of 30.15% of finance SMEs are based in EC postcodes. The EC postcodes represent part of the the traditional ‘City’ location, which is close to Lloyd's of London, the ‘Insurance Triangle’, and also the London Stock Exchange - the historical home of London International Financial Futures Exchange (LIFFE).

3.2% of the total number of finance SMEs are based in E14, which is the Isle of Dogs and Canary Wharf. This demonstrates that finance SMEs often prefer to be positioned alongside of the large financial companies, such as HSBC and Citi Bank. 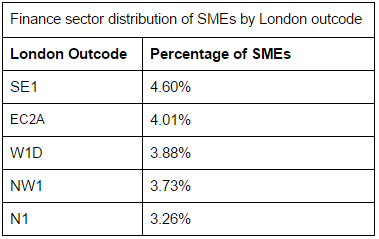 SMEs in the media, advertising and marketing sector:


The study reveals an intriguing insight into the locations of preference for media, advertising and marketing SMEs - as they are split between dense clusters in West and East London. The total distribution of media, advertising and marketing SMEs in West London is 34.75%; whilst in East London, the total distribution is 30.5%.


In West London, 15.6% of media, marketing and advertising SMEs are clustered in Soho and the surrounding areas. Historically, the Soho area has been renowned for housing some of the UK’s most creative and innovative advertising agencies. The study reinforces the belief that there is a tendency for these businesses to base themselves in the Soho area - it can help them to build credibility and attract top talent whilst fostering creativity. 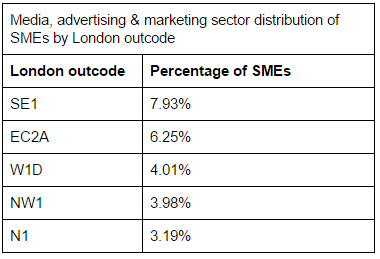 SMEs in the law & legal sector:


Flexioffices’ research has revealed that law & legal SMEs have the greatest density of distribution of a single outcode in NW1, with a total percentage of 4.37%. The  outcode consists of Regent’s Street, Baker Street, Marylebone, King’s Cross and Euston.

There is also a large amount of law & legal SMEs in the EC postcodes, with a total percentage of 26.94%. This area of East London consists of Bank, Moorgate, Chancery Lane and Farringdon.

The W6 outcode, which is the district of Hammersmith, is the third most densely populated area for SMEs in the law & legal sector, with a total percentage of 2.26%. The suggests that law & legal SMEs seek to position themselves around the Inns of Court in the areas of Fleet Street, Holborn and Chancery Lane. 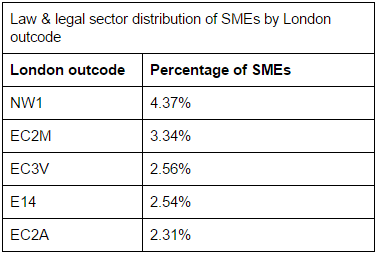 SMEs in the creative and design sector:


The creative and design sector is heavily populated in EC2A with 5.98% of all SMEs based in the area of Broadgate and Shoreditch. Over the past ten years, this area has become popular for creative industries because the office rental costs were more affordable in comparison to other areas of London, and the perceived ‘trendiness’ of being based in Shoreditch is an attractive proposition for many creative and design companies. 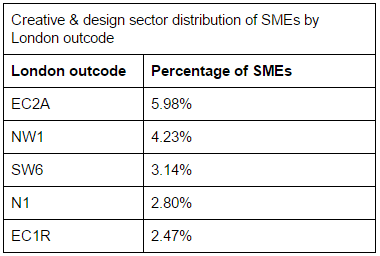 The influence of the River Thames on SME distribution:


Flexioffices’ study demonstrates that 28.4% of SMEs in London are based within close proximity of the River Thames. This provides an intriguing parallel to the historical significance of the River Thames to London’s economy, and the data suggests that this remains the case in 2016.


Paul Slinn, Managing Director at Flexioffices, commented on the study:

"There are numerous considerations that business owners, managing directors and entrepreneurs must address when choosing where to position their business."

"Businesses in the same sector benefit from clustering in the same location to collaborate on jobs and pitches. Location can make a strong statement about how a business wishes to be perceived to potential clients and partners. Maintenance costs and transportation must also be considered."