10 Compliments Your Boss Will Never Give You

There's no use pretending we all hate our bosses - sometimes there genuinely nice people who are able to find a balance between harnessing the manpower of a good team and being amiable and friendly. We all know though - especially us English folk - how hard it is to give a compliment. Some of our line managers are not quite as friendly, you'll never hear a nice peep out of them about all the hard work you've been putting in. For those of you who have this type of boss - this article is for you - here are some compliments your boss will never give you. 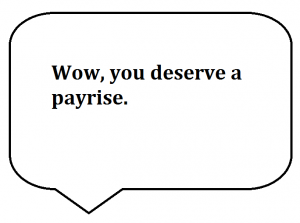 Talent and hard work won't always take you to the top of the pile in some places. Sometimes, an employee or employees must do the boss' job for them. Should you work in a similar environment, wouldn't it be lovely to hear such a boss admit their deficiencies? The likeliness of such an admission is probably enough to power the Infinite Probability Drive for eternity, so don't bother placing any bets on it happening in the future.

2. “You're right … I'm doing nothing but spouting off buzzwords.”

Ah … management speak. What would the world look like without it? Sure we'd have flying cars running exclusively on solar power, manned missions to a newly terraformed Mars and holodecks, but are such things worth it when we could employ legions of annoying people instead?

You've got a great idea that could make you millions. You're excited and want to tell someone about it. You'd like to think your boss would be intelligent enough to understand your idea. This is wrong. They may either not understand your brilliance, or they'll try and steal it for themselves. Patent your idea before telling anyone else about it, especially your boss. Do to your company what your company would do to its competitors: get rid of them.

4. “You're lovely and you make me feel like an excited kitten.”

This entry is a bit of a sorbet, inserted in order to break up the angry bile present in the rest of this article. An employer would only use such a compliment in instances where they're trying to get into your pants. Plus, it's a nice compliment.

5. They give you a compliment in the first place.

There are some bosses who never praise their workers. Such bosses will just put forward cruel jibes in your assessments, although some are more stoic and will neither compliment you or criticise you as they're not too bothered about their job. All you can do in such cases is shrug off the indifference and keep the pay cheque coming in.

6. “You work far too hard and are far too intelligent to be in a job like this...”

… And if you are, they'd never tell you so. There's nothing more irksome to management than an uppity workforce. The bosses will want to keep you in place and use your talent for their own gain should you be ultra-productive person in a lowly position.

If your boss is on the hospital bed dying of renal failure, and the only chance of saving them happens to be one of your kidneys, keep a hold of your kidney. The boss will likely fire you for taking a couple of days off for operation recovery. Let your boss cop it, claim any redundancy payment you can get and find another job. You can't be too nice in this world. Treat your boss mean, keep your boss keen, and put a high price on your organs.

8. “You work harder than the poor of developing nations.”

You work harder, faster and longer than anyone else in the office. In fact, the entire office relies upon you in order to carry out most of its functions. Yet, you only get paid half of what your manager earns. Meritocracy: what a joke, eh?

This is never true for anybody, but people live to hear others utter these three special words. You might even say it to your boss on occasion. Wouldn't it be lovely to hear it uttered about you on occasion? Yes, “you're always right” are the sweetest three-and-a-half words in the English language. Take that, Tolkien.