The 10 Most Annoying Types of Co Worker

We don't, and can't, like everyone we work with, but, unfortunately for us, we're stuck with them for eight hours a day - more time than many of us spend with our friends and family. Here's our top ten of the most annoying types of co worker.

Harmless fun, or a ticking time bomb of disciplinary action should a piece of salacious chitter-chatter go awry and find its way to the wrong person? A small amount of gossip is fine, and can even aide bonding between co workers, but the lowdown on what's happening in their own and their social group's lives smacks of attention-seeking of the worst kind.

They want to get to the top of the company and/or keep their job safe from anything or anyone they may consider a threat. Schemers are the ones you'll want to avoid at all costs, as too much interaction with them could make you a target. Being friends with a schemer is also a dangerous game, as they could well use any opportunity they can to stab you in the back. Schemers substitute hard work and talent with attempts at social engineering and sucking up to the boss.

Most workplaces will have at least one of these. The Perpetually Late are the reason why the snooze button was invented, and will often come into the office bleary-eyed from last night's shenanigans armed with a range of excuses as to why they were late.

How do these types of co-workers get to keep their jobs? They may have connections in HR, have escaped notice due to the anonymous nature of their job/personality or are so astoundingly efficient at their job and really do work on a different time scale to most others (rare, but it does happen).

Usually harmless, but infuriating nonetheless. Patronising Know-It-Alls use their knowledge of a particular subject area in order to bolster their otherwise fragile egos. They can also be stubborn and pig-headed, unwilling to listen to alternative solutions for fear they'll be proven wrong.

What's worse? The person who always stares at you without saying anything, or the person who always talks to you and constantly makes inappropriate remarks? Both are as bad as each other, and the two often go hand-in-hand, although the one who pesters you closely rather than from a distance is perhaps the more immediately annoying.

They can seem like the life of the office at first, but the Prankster's act wears thin quite quickly. Someone who tries to play a prank everyday can get grating, mostly because they burn out of jokes quickly. This makes the Prankster quite predictable, and prevents other co-workers from treating them seriously. The occasional office prank at Halloween or April Fool's Day is fine, welcome even. Should you be a potential prankster, keep things in perspective and only commit to practical jokes that are clever, original and avoid making anyone in particular the subject of a joke (unless you're in a prank war).

The Wanna-Be Boss is quite possibly the most infuriating of co-workers, as they love a power-trip and like to show it wherever possible. This makes them the most vocal of annoying co-workers, and therefore more likely to be 'in your face' at inopportune moments. Such people really are testament to the adage “those who want power are least suited to wielding it.”

Similar to the Schemer in many ways, though Bottom Feeders do not necessarily actively 'scheme' in order to get where they are or want to be. Bottom feeders usually get into high places by leeching off the work of others and rubbing shoulders in the right circles. Schemers are made, Bottom Feeders are born.

Aka 'old misery guts'. This is the person who'll put a downer on even the nicest of news. Yes, even if you hear the news that 'the government has declared Crunchie bars will be free on Fridays”, the Office Grump will find a way to put a dampener on the excitement. 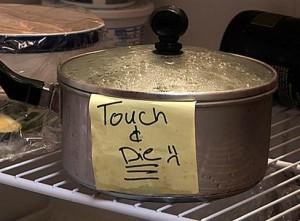 Is there anything more infuriating than opening the staff room fridge to find your tuna sandwich/homemade tomato soup is suspiciously absent? The Lunch Thief has struck again! It doesn't seem to matter what you bring in - even sushi falls foul of this human garbage. A polite post-it note declaring the food as yours is the polite thing to do, but sometimes a full-on stakeout of the staff room is the only way to resolve the matter.