The History of Workplace Fashion

What we consider to be the workplace has only really existed since the eighteenth century, and that is stretching modern ideas of the workplace and the office. Certainly, there were no water coolers and cubicles during the Industrial Revolution! As our idea of work has evolved, as have the ideas of what is appropriate to wear at work.

To explore the various styles, we have built an interactive timeline (pictured below), which begins at the start of the Industrial Revolution, a process that lasted well over a hundred years and changed the entire concept of work and production. You can watch as the workplace begins to evolve and enter public perception, as industry and work moves from inside the home – where you could slob about in your pyjamas, for all the customers knew – to factories, shop floors, and the great industrial cities such as London, Liverpool, and Newcastle. The history of workplace fashion is a small way to look at the progress and development of the past two hundred years; a microcosm of social history, politics, the rise and fall of empires, and the advent of quick and easy global travel. World events such as the American Civil War or World War Two changed fashions purely by producing cloth shortages; the invention of the London Underground and commuting lead to the bowler hat becoming that quintessential symbol of British work. You can't wear a top hat on a tube train, after all. 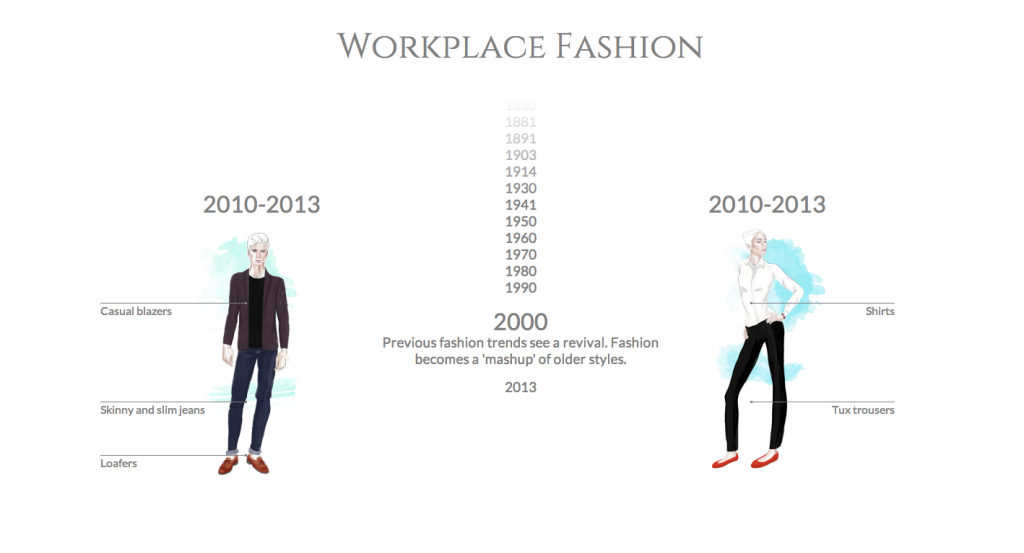 Fashion is one of the quickest and easiest things to change, but paints a picture of the world that the wearer lives in. Uniforms and office attire reflect the rise of mechanised industry, the embracing of new technologies, the effects of war; from breeches to crinolines, from bowler hats to miniskirts, each item of fashion has something to say about the world it was produced for and was worn in. Think about what you wear to work – what does it say about you and the world you live in? And, more importantly, do you think it’s time for the bustle to make a comeback into offices?

Click and scroll through the timeline to watch as the working world changes radically from decade to decade, producing new demands on men and women, and how clothes adapt in function and purpose. The silhouettes remain the same, but hemlines shorten, the suit comes into play, and fabrics and styles change radically, each responding to political, social, or industrial change. You may think fashions are ephemeral, but what you wear to work is a statement – and while everything else has changed about the workplace and how we perceive it, that is something that will never change. If you thought your mum wearing trousers to work for the first time in the seventies was a big deal, how do you think people reacted to the first top hat? Or the very first three piece suit?

What links do you see between world events and how people dress for work? Join the discussion in the comments below or on Twitter – we would love to know your opinions!